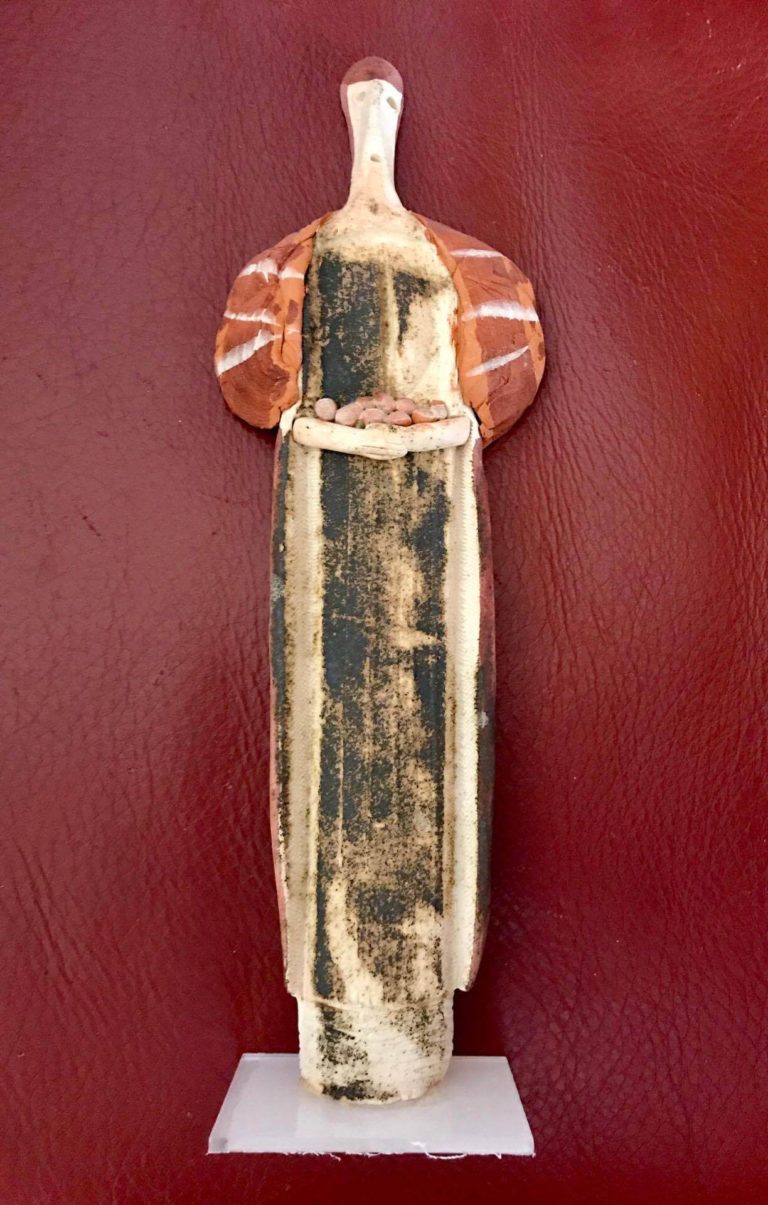 The prizes awarded to the winners are as follows:

The following awards were given to the Greek section:

in the movie "METAFORA" by ILIA GIANNAKAKI.

1st AWARD FOR BEST DOCUMENTARY in the film "BABEL" by MOLETIS MOIRA.

2nd PRIZE FOR BEST DOCUMENTARY in the film "GEORGE OF KEDROS" by GIANNIS AND GEORGE KOLOZIS.

for the movie "ALONE IN THE FOREST".

BEST MUSIC AWARD to THEODOROS LEMPESSI for the film "ALONE IN THE FOREST".

SPECIAL HONORARY AWARD TO YANNIS KARPOUZIS for the film "NIKOS KAROUZOS THE ROAD TO EAR".

PRODUCTION AWARD to APOSTOLIA PAPAIOANNOU for the film "METAFORA".

SPECIAL HONORARY DISTINCTION to MAGDA REMOUNDOU for the film "WHO IS EUGENIO BARBA".

HONORARY DISTINCTION to TZELI HATZIDIMITRIOU for the film "LOOKING FOR ORPHEUS".

HONORARY DISTINCTION to LINO AND DIMITRI KAFIDA for the film

"SPYROS AND THE ROUND OF DEATH".

The following prizes were awarded for the foreign language section:

AWARD FOR BEST MUSIC DOCUMENTARY in the film "BABYLON" by JESSICA GOULD from the USA.

LARA LEE BEST DIRECTION AWARD from the USA for the film "WANTOKS".

For the West Side Mountains Doc Fest 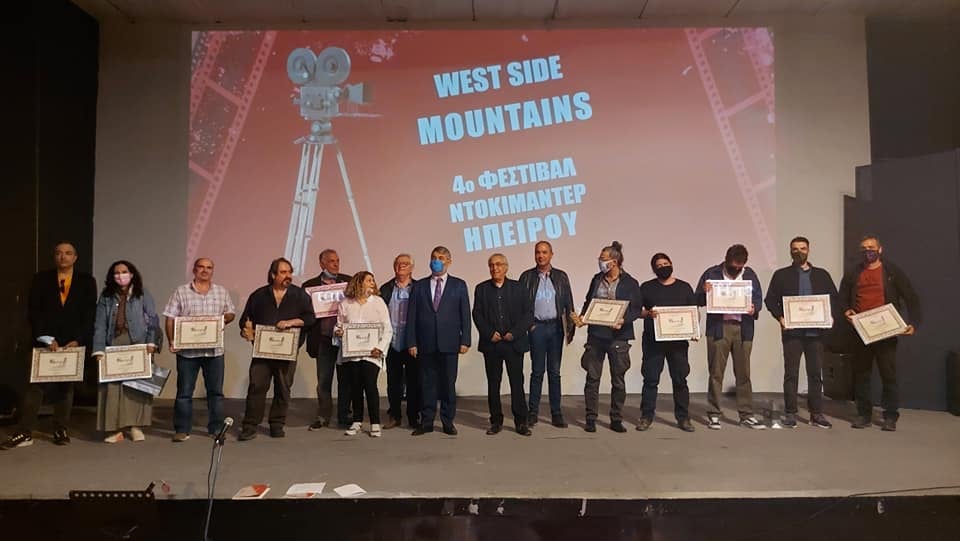 The winners of the West Side Mountains Doc Fest for 2020 are:

The ranking of the awards will be announced at an event in Athens next October.

Forest of Tranquility Directed and photographed by Christoforos Anagnostopoulos

I Remember Directed by Menelaos Kyrlidis,

The girl who was born twice Directed by Nikos Loupakis

To the movie Collecting Time, directed by Christos Sagias

To Christos Karakasis for the movie "Take a trip"

To Grigoris Giarelis for the movie "Take a trip"

Honorary distinctions are awarded to:

Voula Germanakou Kopsini for her film "The Story of Yannis"

Nikos Loupakis for his film "The girl who was born twice"

A special honorary distinction for his overall contribution to the cinema is awarded to Menelaos Kyrlidis, who participated with his film "I Remember"

The big winners of the West Side Mountains Doc Fest for the year 2019 are :

THE ROOTS by Eliza Soroga and Aigli Drakou Greece

ALONE WITH THE SEA by Miguel Ángel Santacruz Sevilla

The series of awards will be announced in Athens at a major event in October.

The films that received honorary distinctions:

Each winner will receive a parchment and a statuette.

ANNOUNCEMENT OF FINAL RESULTS OF WEST SIDE MOUNTAINS DOC FEST 2018

The committee saw 386 films from 80 countries, from which it selected 40 that were screened during the previous 5 days. From these emerged the seven finalists, and the three winners, according to the announcement of the Festival. Two honors were also awarded:

A film created by Nikolaos Galanis, Nikos Konstantakis and the children of the primary school of Kounavio, Crete, as a small contribution to the refugee problem.

The film was created by Nikos Loupakis and refers to the struggle of young and old actors to keep the theater alive in Greece.

Thalatta, a Greek documentary by Triantaphyllia Dimopoulou, about the exploitation of the Greek Seas, a field that no one has ever sown but everyone is trying to reap.

Pastores de la Niebla (Shepherds of the Fog), a Spanish documentary by Domingo Moreno, about the millennial pastoral tradition of the shepherds of the Picos de Europa National Park.

Sea of life, a Canadian documentary by young Julia Barnes, a challenging journey through the most amazing and endangered marine ecosystems on the planet and the struggle of the movements for their salvation.

By any other name, an American documentary by Steven Gayle that examines in detail the relationship between African Americans and Indians on a genetic and cultural level.

The winner is the film

Sea of life by Julia Barnes, for the richness of the filmed underwater material, the excellent research, the variety of views of both experts and politicians as well as ordinary members of the ecological movement.

Nominees for the jury award were:

Fugir de l‘oblit, (A Escape from Oblivion), a Spanish documentary by Abel Moreno, which describes the adventurous life of 91-year-old Catalan Pitu.

Facing death with wirecutter, an Iraqi documentary by Sarwar Abdullah about a military team of Kurdistan Army engineers working with very simple equipment to remove bombs and landmines. by ISIS.

Pure Charcoal, a Swiss documentary by Robert Müller that describes 3 generations of Swiss who continue the traditional production of charcoal.

The winner is the film

Fugir de l‘oblit, (Escape from Oblivion), by Abel Moreno, for the perfect story, which emerged through extensive research, presented with careful use of effects, creating a special cinematic writing. And for the great way in which he combines the struggle for both personal and collective memory.

For the West Side Mountains Doc Fest Grand Prix, the film was selected:

Aquagranda in crescendo by Giovanni Pellegrini.

The documentary follows composer Perocco, director Michieletto and the team of Venice's historic La Fenice Opera House, telling both the birth of a modern opera and the story of the tragic 1966 flood that shook the heart of Venice.

In the opinion of the committee, it is a poetic masterpiece, with an excellent script and perfect direction, where the filmed snapshots from the rehearsals of the work, are contrasted with the historical events. Contemporary music and water are the real protagonists. The excellent sound and the perfect photography, together with the professional editing, make this documentary a film that captivates the viewers.

Members of the selection and award committees were: